Should You Drink Alcohol When Talking To Girls? What To Say If She Asks 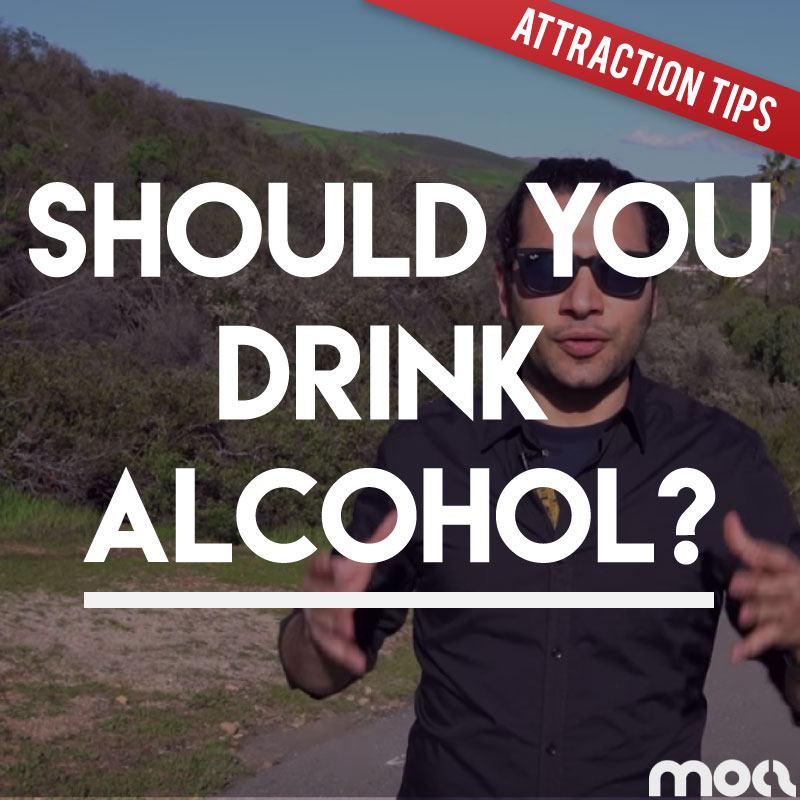 Give the shyest girl in the bar enough alcohol, she’ll dance on the bar.

Give the shyest guy in the bar enough alcohol, he’ll go talk to her.

Alcohol is a drug that gives you all the confidence you never had before, which in theory, sounds like a good idea. However, take away that drink, and you become scared and anxious. That’s because alcohol clouds your judgement, and makes you take risks that you previously weren’t brave enough to take.

Alcohol can make you the biggest baddest wolf and have the courage of a lion, however if you don’t own the base skills to socialize with women and get them attracted to you then you’re only shooting yourself in the foot.

You’re probably expecting me here to say one of two things.

Never drink alcohol again. Ever, ever.

It’s fine you can drink all the you want and you’ll be fine.

It isn’t as black and white as you might think. However, I will say this:

If you are brand new to game, if you are out to learn how to socialize, and want to improve your game, then quit alcohol for the first 4-5 months of practise. Why?

Because alcohol is liquid courage it becomes a crutch. How many times have you heard the following:

“I can’t talk to those girls over there, I just need to get a drink first”

Many guys use alcohol to talk to girls, but take that away and they have no clue what to say. So time and time again you’ll find them at a bar and the more they drink the more brave they get.

I know some guys that are brave enough to jump off a building into a community pool, or set their head on fire. That’s pretty brave in my opinion. I love my legs (and my hair) way too much to ever attempt stunts like that, so you might say I’m a coward.

Being brave enough to do something, isn’t always a good thing. You may have the courage to talk to a girl, but you could be completely clueless on what to say and how to get her interested in you. That’s why you need to learn the skill sets without alcohol, so that you can reap the benefits later when you do decide whether or not you want to drink.

I’m not your mum, I’m not here to lecture you on the negative effects of alcohol. I personally chose not to drink for health benefits.

Is it going to kill you? No, in fact, if you’re out with a girl and you feel like having a drink with her, do it, just don’t over do it.

The scariest question for any guy who’s involved in pickup. F*ck! What do I say now?

Depending how strong your frame is you can do one of few things.

Completely own the fact that you just don’t drink. You don’t need to logically explain it to her, you can literally just say, yea I don’t like it, anyway, then change subject onto something better.

If you’re still new to all this and you’re not brave enough to pull something like that off then you could just say you aren’t drinking tonight because you had too much to drink the night before, or that you are the designated driver.

If even that is STILL too petrifying for you to pull off then you can simply get a glass of water, with ice, and put a lemon or lime in it and act like it’s your drink. Do I recommend this? No. But I also know that some of our readers range from 26 year old playboys pimping it every single night to 40 year old virgins and I’m here to help both. So pick your poison, but the aim of the game is to not care about external judgement.

Alcohol can make you the biggest baddest wolf and have the courage of a lion, however if you don’t own the base skills to socialize with women and get them attracted to you then you’re only shooting yourself in the foot. If she asks you why you aren’t drinking you can completely own it by saying you just don’t or you can ‘fake it till you make it’ by holding a glass of water with ice and a lemon till you develop the balls to tell her that you don’t drink. You can still have a drink every now and again, but don’t over do it.