How to get a girl to stop ignoring you 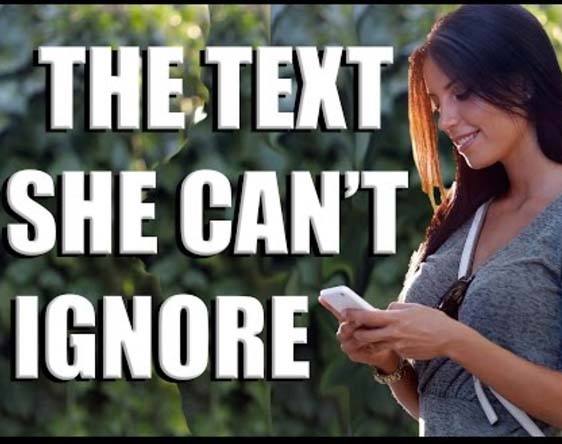 You'll learn in this article:

Text game is a very grey area in the field of pick up.

Everyone seems to have their own ideologies on the topic, rules, myths and so on and so forth. However, we don’t think it should be that complicated at all. Let's get started with the video below (or scroll down to read the rest of this article):

Quick Navigation
Text game will not get you laid.
#Step 1: The Mistake Most Men Make
Step #2:  Let’s Look at The Situation
Step #3: Your First Text
Step #4: Closing
The Goldfish Attention Span Remedy (GASR)
BONUS: The Text She Can’t Ignore:
Extending The Tension

Text game will not get you laid.

No matter what you think, a few back and forth written messages will not be the deciding factor of whether a girl will sleep with you or not. So how do you go about it ? Its simple really, texting should be kept to an all time minimum.

The text should be used as a method to meet up with her, nothing else.

You don’t care about her life dreams, how her day was,

Remember: The getting to know her happens in person.

The getting to know her happens in person. Text game (only) will not get you laid.

No matter what you think, a few back and forth written messages will not be the deciding factor of whether a girl will sleep with you or not.

So how do you go about it?

Its simple really, texting should be kept to an all time minimum.

The text should be used as a method to meet up with her, nothing else.

You don’t care about her life dreams, how her day was.

#Step 1: The Mistake Most Men Make

If you say any of the following:

“If I robbed a bank would you help” (terrible canned routine)

“What is your favourite colour”

…. Or any of the other bullshit texts that people use to “get to know a girl”

The getting to know her happens in person.

Step #2:  Let’s Look at The Situation

Getting her number should only happen for ONE, and one reason alone:

[thrive_text_block color=”dark” headline=”Remember This Rule:”]Getting her number should only happen for ONE, and one reason alone: The current logistics won’t allow you to have sex with her the same day or night.  [/thrive_text_block]

So, if you are out and she is about to go to the airport, she has a friend staying from another country, you are in a rush to go somewhere, that is why you get her number.

You aren’t able to have sex with her then and there, so the number is used for scheduling that sex date. That’s it.

Your first text should be an intro, without any means to a reply.

As soon as you get the number, text her saying your name and nice meeting you or whatever. So send something along the lines of:

The reason for this is you don’t want to have to get to that awkward phase of:

“Hey it’s me! Peter! from the bar? Remember? I asked you about turtles and you said bla bla…”

Now, depending on how good the interaction was, you can be cocky and adventurous about it and use something like “Save this number, it’s the most important number you’re ever going to get. (your name)”

The next step to do is to arrange the meet Getting to know her as mentioned earlier is useless, so go for the straight:

[pullquote align=”center”]“have a drink with me” [/pullquote]
… whatever it is as long as you make a solid plan.

[pullquote align=”center”]“Ok cool, let’s do it tomorrow night then” [/pullquote]

you need to be persistent.

Now-a-days it’s very easy for a girl to lose track of what’s going on, and just get caught up with her busy life and her other options.

At MOA we call it the ‘Gold fish attention span’ so you cannot just let it go or accept an uncertain answer.

Get the job done.

The text to get her to stop ignoring you: Yes, it happens to all of us, you’re not alone.

You’ll text a girl, no reply, again no reply, even a third time and STILL no reply.

Don’t take it personal, if a girl is attractive she will have several guys texting her at the same time, it’s great ego boost and validation for her and she loves it.

BONUS: The Text She Can’t Ignore:

We’ve come up with an awesome text that will get her to reply, and even chase you if she’s been ignoring you, here goes:

It’s insane how well that text works, it will get not just a response, but an investment response, which means she will be genuinely curious what happened.

Now, don’t reply straight away. Have some fun with this, let her chase a little.

I’ve had girls call me 5 times in a row, just to find out what the crazy thing that happened was.

Just give it a little bit of time, and eventually, give her some attention. You don’t even have to answer, you can just be like:

[pullquote align=”center”]“Long story, I’ll tell you when i see you, let’s have drinks tonight.” [/pullquote].

This is useful when you got the number fast and weren’t able to build proper attraction from the girl, or if she just generally becomes less interested in you she’ll usually just put you aside as her validation giver.

That’s pretty much it, it should be kept very simple, only text to arrange a day 2, and never waste too much time working on a single girl ‘begging’ her to see you.

Remember, get her to chase a little 😉

If you want more tips. Make sure to get my FREE GUIDE, called ‘Step-By-Step Attraction’