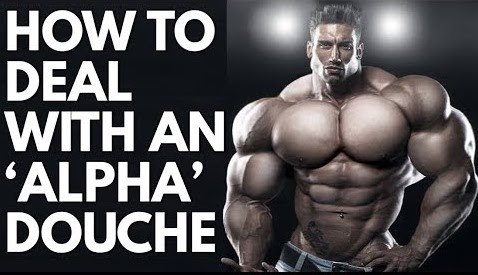 If you have been going out for long enough, chances are that you have encountered the infamous ‘Alpha Douche’ trying to steal the girl you are talking to.

He usually shows up in one of the following forms:

If you can relate to any of these scenarios, this article will help you immensely in dealing with these situations. It can be uncomfortable and stressful to overcome these obstacles.

After some time of getting the reference experiences however, you expect it to happen and can use it to your advantage to dismantle the cock-blocks and get the girl.

Quick Navigation
#1 Frame Is Everything
#2 It’s Not Worth It. Don’t Be That Guy
#3 Dismantle Him And Get The Girl
TO SUMMARIZE

The mindset you want to have when dealing with guys trying to Out-Alpha you and steal the girls attention away from you is that of abundance.

When you come from a place of abundance, women are more receptive to your advances because of the subconscious vibes you radiate out. Having freedom from outcome will get you out of your head and help you keep the girls attention. Then she realizes you’re not the needy guy who is begging and competing for her attention.

Paradoxically, not competing with the guy for her attention, increases your chances of hooking up with her.

A great quote by Rollo Tomassi, author of “The Rational Male” claims that: Let that sink in for a second and go back to all the situations when you were free from outcome and just having fun with the girls. When you didn’t need the girl and try to prove yourself to her, it makes her that more attracted to you and all your interactions went better.

The difference between you talking to the girl and the ‘friend’ trying to steal her away is exactly that. The ‘friend’ needs her attention and will do anything to get it back because he is scared of you talking to her and ruining his chances of hooking up with her. You, on the other hand, have abundance and don’t need anything from her. It gives you a chance to demonstrate high value in dealing with the situation.

Before getting into the details of what to actually do when dealing with the guy trying to steal your girl, here are some of the things you absolutely shouldn’t do under any circumstances. Although it may go against every grain of your being and you may be tempted to do exactly the things listed below, don’t. Just don’t.

#3 Dismantle Him And Get The Girl

This segment when used correctly, can be extremely powerful although it may take some time to read the situation and do it properly. Below I will discuss the different types of guys who will come and go again if you do it the right way.

This is the best trick you can possibly do when a guy comes over to steal your girl. Remain non-reactive to him and continue talking to her as though he’s a lamp shade or an ornament in the room. This works more effectively when it is a random guy who she doesn’t know or knows him a little. When you act as though he doesn’t exist and stand your ground, the guy will feel awkward and will feel as though if he carries on, he’ll be trying too hard.

Slightly acknowledge him – The “Pat on the back of DEATH”

If the guy doesn’t leave you and the girl alone even after ignoring him, give him a condescending pat on the back. This takes away his power over you immediately because you aren’t being aggressive or walking away from the interaction. He will feel confused and not know what to do because if he escalates the situation, he’s the one being a dick. In most cases, at this point he will walk away or stay there awkwardly with his dick in his hand.

My favourite thing to do with big guys getting physical with me and trying to AMOG the interaction, is to grab his bicep or back and say “ OMG dude, do you work out?” Big guys like that can be immensely homophobic and will back off awkwardly while you continue talking to the girl.

In all these situations, it is important that you stay cool, calm and collected.

Avoid confrontation at any cost and remember that ignoring the guy is the best thing you can do.

Have fun out there.

So now you know exactly how to handle the ‘Alpha’ douche guys whenever and wherever they show up.

Boom! The guy is blown out and the attention is back on you and the girl only.

So now you might think: ‘Alright, what was my next move again? Where should I go from there? Damn.’

Click below and I’m gonna show you exactly what to do next!

Take Action And Get Her!
At the Ministry of Attraction we teach ordinary men how to attract women that normally they only dream of. We help develop confidence, social skills, and most importantly we prove that it's possible. Follow us on Youtube.